The Awakenings Project: Empowering and healing through art

Empowering and healing through art 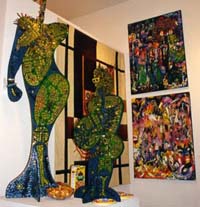 The Awakenings Project is a grass-roots initiative in the Chicago suburbs, whose mission is to foster, advance, and benefit the creative efforts of artists with mental illnesses and/or addictions. Additionally, The Awakenings Project works to raise public awareness, acceptance and appreciation of art by people in recovery in all creative endeavors but especially fine arts, music, literature, and drama.

The Awakenings Project, which has grown steadily over the last two decades, has multiple facets. Its programs encompass exhibits and sales of fine art, publishing of an internationally recognized literary journal (The Awakenings Review), production of CDs of music and poetry, readings and development of works of the theatre.

The forerunner of the Project, The Awakenings Art Show, debuted in 1996, and is now a regular activity of the group, along with the operation of a working art studio. Here artists have access to a "drop-in" environment providing a supportive creative atmosphere including work space, companionship, and solitude for those who seek it. Begun in Glen Ellyn in 1999 and since July 2008, the studio has relocated to Elgin, Illinois, and is used for multiple functions, such as writing workshops, play rehearsals, and receptions. Second City came out once to lead an outreach workshop.

Since 2000, The Awakenings Review has published 14 issues. The journal receives submissions from all quarters of the U.S. and from a host of foreign countries. Begun in conjunction with the University of Chicago Center for Psychiatric Rehabilitation, the journal publishes works by writers and poets who have a disclosed relationship with mental illness, either self, family member, or friend. In its pages the journal has and will continue to publish insightful, moving and provocative literature, and has been hailed by established literary figures as an important addition to the literary community.

Awakenings was the winner of the "Outstanding Contribution to Recovery by a Non-Profit Organization" award from the Irwin Foundation at Celebration Recovery in 2006. Awakenings also received a "Stigma Busters" award from Ecker Center at the Elgin Country Club in 2010, and in both 2015 & 2018, was selected for the Best of Elgin Award for Non-Profit Organization. The award was created to honor and generate public recognition of the achievements and positive contributions of businesses and organizations in and around Elgin. The Awakenings Project has been fortunate in connecting with CLOZTALK, an innovative organization begun by the Imerman Brothers and friends. They support many wonderful causes which bring attention to such organizations as The Awakenings Project. 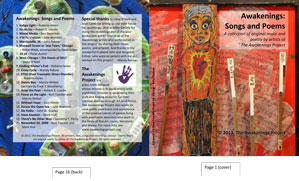 Postponed due to COVID-19

Originally planned for April 3 - 25th, 2020: A month-long celebration of Mental Health, in preparation for May, which is traditionally Mental Health Awareness Month. We will host an Open Mic for Poets and Musicians. This exhibit will take place at EXibit Gallery in Morris, Illinois. The date of the Opening Reception was Saturday, April 4th. Currently being planned for June 6th from 3-5 PM. Believe me, you don't want to miss this one!

Dates and Locations to be announced 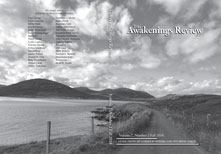 The Awakenings Review is published by the Awakenings Project. Begun in cooperation with the University of Chicago Center for Psychiatric Rehabilitation in 2000, The Awakenings Review has been acclaimed internationally and draws writers from all over the United States and from several other countries including Israel, South Africa, Australia, Finland, Switzerland, the United Kingdom, and Canada.

Can Art Ease Symptoms of Schizophrenia and Other Mental Illnesses?