Awakenings Project: About Us

Empowering and healing through art

We are an independent 501(c)3 not-for-profit corporation. All donations are fully tax-deductible.

FIRST AND FOREMOST, WE ARE WRITERS, MUSICIANS, PLAYWRIGHTS, AND ARTISTS. 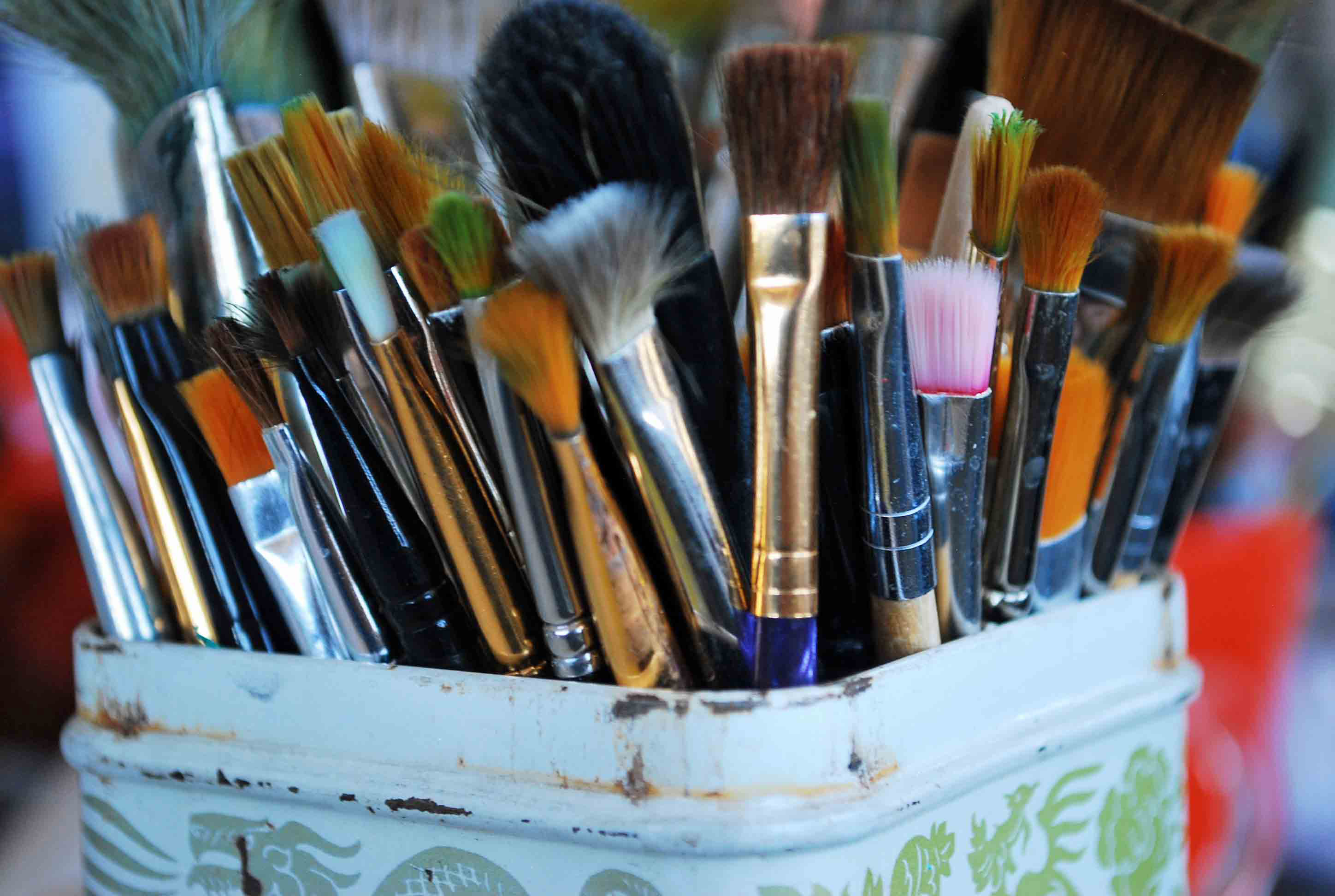 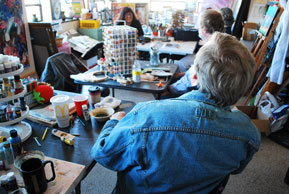 SECONDLY, WE ARE PEOPLE WHO KNOW MENTAL ILLNESS FIRSTHAND.

Poignantly, among scores of celebrated artists, writers and musicians there exists a positive relationship between mental illness and creativity. The Awakenings Project does not purport to be a breeding ground for artistic prodigies, but we have found there is a widespread interest in the arts among our artists.

It's out there. As much as 18% of the population of the United States may experience a major mental illness in any year. As many as 25% of women and 12% of men experience an episode of major depression sometime during their lives .Fully 1% of the population has schizophrenia, (enough in Chicago to fill Soldier Field) while another 1 to 2% fit into the bipolar category. There have been significant advancements in the treatment of these disorders, through medicine and rehabilitation, but we believe it takes an effort such as The Awakenings Project to advance recovery and empowerment.

The Healing Power of Creativity

People familiar with mental illnesses understand the loss of purpose and self-esteem which accompany them. The arts can heal some of these wounds, providing people with hope, purpose, and a sense of identity. Self-expression through art—whether it be in the form of painting, writing poetry and short stories, or writing, producing and playwrighting, playing a musical instrument or composing a piece of music—is a purposeful and optimistic activity.

Creativity in literature and art can heal wounds. They afford a person goals and direction. For instance, an Awakenings artist may anticipate upcoming shows, get their work prepared, hang an exhibit, find companionship, grow and develop artistic talents, and make sales or win commissions. It is a purposeful and optimistic activity. The artists plan , look forward to grow and develop their artistic talents. The writer receives critiques, finds a publisher, and most of all gets a sense of satisfaction that his/her work is read and appreciated. This is healing; this is The Awakenings Project.

The Support of Community

When artists, writers, musicians, and thespians join together in a creative activity, the communal association alone has healing power. Fundamentally it helps people overcome rejection and isolation. This reaches far beyond the walls of the studio, or the set of a play; it results in long-lasting friendships and collaborative relationships. Moreover, this relationship morphs into a role in the community. The public appreciates the work of the artist or writer, musician or actor, they in turn develop pride, esteem, and identity. Over the years, we've received accolades from parents, siblings, spouses, friends, and the other artists about how important Awakenings has been for their community.

The Development of Competence 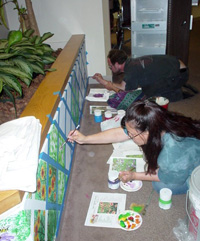 A core group of volunteers knows the effort it takes to make sure each exhibit, every journal, all the music, poetry readings, and plays readings are professional.

For instance, The Awakenings Project held four dinners from 2003 through 2006, made possible by charitable contributions from AstraZeneca. Awakenings artists donated artwork to local hospitals and mental health centers. The guests experienced a whole range of arts activities, a display of visual arts, performances by musicians, readings by poets, and monologues or scenes from dramatic works by actors. Everyone and everything was dedicated to competency.

The Discovery of Confidence 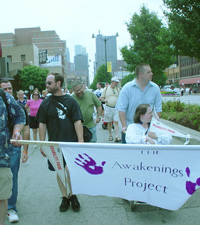 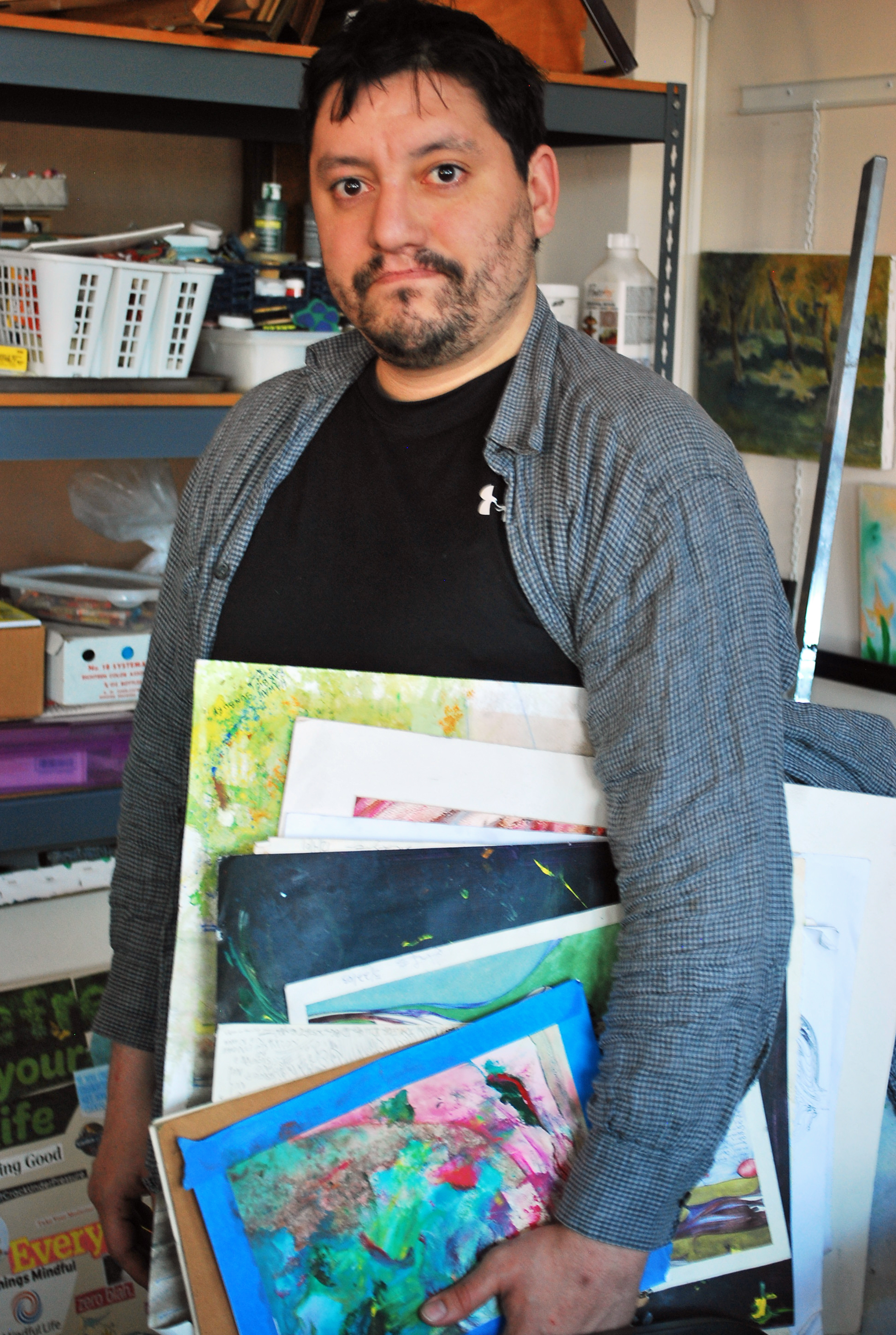 People with mental illnesses experience stigma and discrimination by a society that views mental ill health differenty than physical ill health. Caricatures of people with mental illnesses are biased toward bizarre or violent behavior. Acceptance can be advanced through projects like Awakenings, which in turn promotes confidence. Our exhibits, writings, performances, and community activities say that we are capable and want to contribute positively to society. Researchers agree that empowering our lives is essential to overcoming stigma and achieving our potential. Art is one mechanism to facilitate this. Seeing the personal growth in social skills, confidence, and self-esteem in Awakenings' participants is remarkable.

These artists still experience stigma and discrimination by a society that views mental ill health in a different light than physical ill health. So all the way back in 2005 Awakenings asserted their place with people with other disabilities by participating in the 2nd Disability Pride Parade in Chicago. Over the years, we've come out of the mental illness closet, we've grown, and we now carry ourselves with a confidence that displaces stigma.

A History of Giving Back to the Community

One of our greatest rewards is serving others, and contributing to the community. For instance, for several years, we conducted weekly creativity workshops with residents of Wheaton Care nursing home. With support from a grant we received in 2008 from Hinsdale Center for the Arts, we were able to expand our nursing homes project to include DuPage County Convalescent Center. 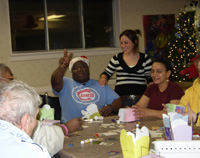 Several members of The Awakenings Project have lead "Imagery Journaling" at Larkin Center in Elgin, and West Chicago Terrace nursing home. Again, Awakenings members led art-making groups at Wheaton Care Center and the DuPage Convalescent Center.  The groups were "project-oriented," with each member creating a functional and beautiful piece of artwork. All of these programs were partially supported by a grant from the Community Arts Access Program, which is funded by The Illinois Arts Council and was re-granted by Hinsdale Center for the Arts. 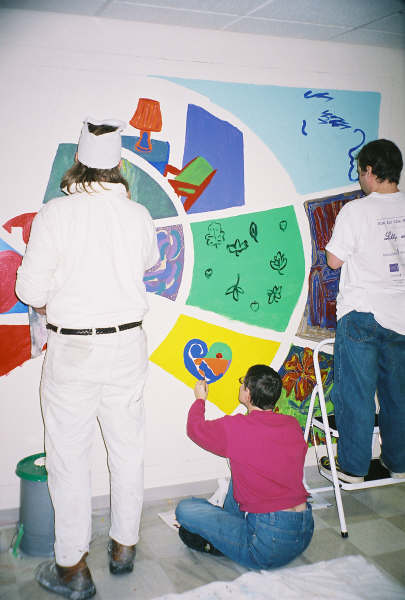 One of the more interesting projects The Awakenings Project completed was a mural on the psychiatric unit at Good Samaritan Hospital in Downers Grove, Illinois. The work of over 20 artists , it took months to complete. A Wonderful Opening Reception was held as part of the Brighter Beginnings in Mental Health Program, sponsored by AstraZeneca Pharmaceuticals.

In the Summer of 2007, Good Samaritan invited us back, and many of the same artists worked on murals for the geriatric psychiatry unit at Good Samaritan Hospital.These murals were meant to evoke memories in the elderly patients on the unit. There were awnings, porch swings, wildflowers, a diner sign, a tree with all seasons, and a grape arbor. To read an article about the murals, and see Mike Rudis' painting which was donated to the Hospital, see page 4 of the DuPage County Health Pro Newsletter Health Pro newsletter.

The Awakenings Art Show—later to evolve into The Awakenings Project—was first conceived in 1996 when Robert Lundin, then member of the board of directors of the National Alliance for the Mentally Ill of Illinois (NAMI-IL), became involved with the planning committee for NAMI-IL's annual convention. Intrigued and inspired by the work of Kay Redfield Jamison (Touched with Fire: Manic Depressive Illness and the Artistic Temperament, 1993), he and the founders of Awakenings believed an art show would give NAMI an activity by which it could fuel its "consumer" constituency. The Awakenings Art Show, they thought, might uncover talented artists who were otherwise dismissed by the art world, and inspire them to take their rightful place in society as artists and creators. This might serve to help raise their ambitions and determination, while educating and inspiring people who viewed the show.
Together with NAMI-IL, who shared enthusiasm for the idea, the initial founders set about organizing the show, and contacting friends and colleagues whom they thought might have mental illnesses to get them involved. First to be contacted was Trish Evers, a professional artist and Irene O'Neill, who co-owned an art gallery. With skilled help from the artistic community, including Ben Beyerlein, Anton Witek, William Alexander, Chet Witek, O'Neill, and Evers, the show went on.
The Awakenings Art Show debuted at the 1997 annual convention of NAMI-IL in Lisle, Illinois, a western suburb of Chicago. The first show attracted nearly fifty exhibitors. That number increased to seventy by 1998. Awakenings has since exhibited at seven NAMI-IL Conferences and several NAMI-National Conventions. In 1998, a Chicago gallery hosting The Awakenings Art Show misprinted the Art Show's name as "The Awakenings Project" in its promotional literature, and the name stuck.
Read more about us: Visual Arts | Literature | Music | Drama